Franklin Delano Roosevelt was the 32nd president of the U.S. and is best known for his policies that helped America dig its way out of the Great Depression. Franklin D. Roosevelt's family history dates back to Claes van Rosevelt, the Dutch immigrant who brought the Roosevelt's to New York City in the early 1600s. In 1652, Claes bought 48 acres of land in what is now Manhattan and included parts of Lexington and Fifth Avenues, along with the future site of the Empire State Building. Claes' son Nicholas Anglicized his surname to Roosevelt and began the tradition of holding political office. He was elected an alderman. 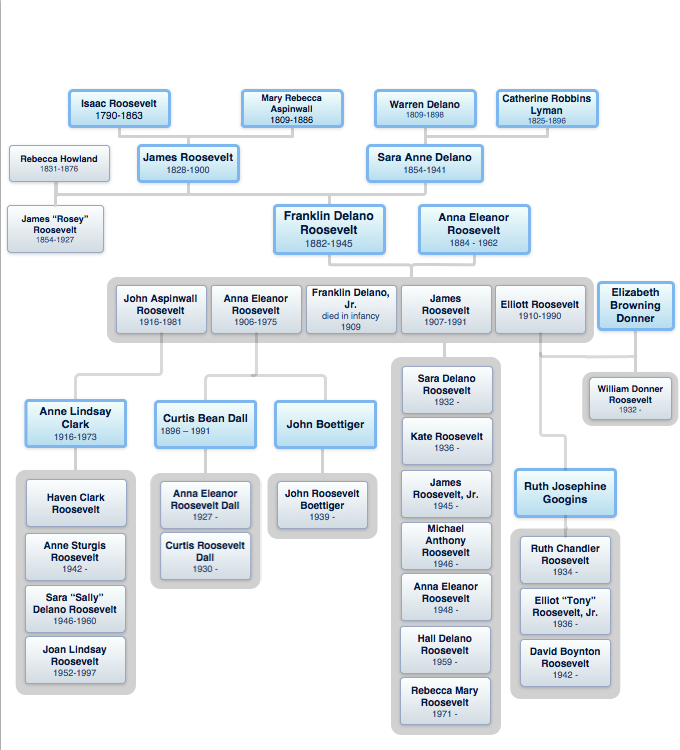 Franklin D. Roosevelt's family history includes the fact that he was the only president to be elected to more than two terms. In fact, he was elected to a fourth term that he was unable to complete when he died in 1945.

Franklin D. Roosevelt was born on January 30, 1882, in Hyde Park, a town in the Hudson Valley in New York. He was part of the Hyde Park Roosevelts, known for being Democrats, while the Oyster Bay Roosevelts, which produced Theodore and Eleanor Roosevelt, were largely Republicans. Franklin D.Roosevelt's family tree includes Isaac Roosevelt, who was a merchant in the late 1700s and co-founded the Bank of New York with Jacobus Roosevelt of Oyster Bay.

Franklin D. Roosevelt was first elected president in 1932 when he beat the incumbent, Herbert Hoover, in a landslide victory. His New Deal plan was quickly implemented in the form of providing government jobs for unemployed Americans to promote economic growth and by reforming finance. He created the Securities and Exchange Commission (SEC) to regulate Wall Street, Social Security Act that passed in 1935, and the Federal Deposit Insurance Corporation (FDIC). As the economy began to recover, World War II broke out, and President Roosevelt made the decision to enter the war in 1941 after the attack on Pearl Harbor. The war increased manufacturing, and unemployment plummeted as jobs were created to help the war effort.

Franklin D. Roosevelt's family genealogy is filled with politicians, a tradition that began in the 1600s with Nicholas Roosevelt. The Roosevelt family tree is an old one that always had wealth and social influence. In 1871, James Henry Roosevelt was the founder and benefactor for Roosevelt Hospital, which is still in operation today in New York City. James Roosevelt Bayley, the grandson of Henry Barclay and Helena Roosevelt, part of Franklin D. Roosevelt's family tree, converted to Catholicism and became the Bishop of Newark and then the Archbishop of Baltimore in the 1850s. Franklin D. Roosevelt began his political career as a state senator. He was then appointed as Assistant Secretary of the Navy by President Woodrow Wilson before he was elected Governor of New York in 1929.

Eleanor Roosevelt, whose first name was really Anna, was a firm supporter of creating the United Nations and became a U.N. delegate from 1945 through 1952, where she chaired the committee that wrote the Universal Declaration of Human Rights. She remained active in politics even after Franklin's death in 1945 and championed women's rights, heading JFK's Presidential Committee on the Status of Women. Franklin D. Roosevelt had an affair with Eleanor's social secretary Lucy Mercer, and their marriage never fully healed, although a divorce was frowned on because it would negatively impact Franklin's political career. This is why Eleanor was not with him when he died, although Lucy Mercer was present. Franklin D. Roosevelt's lasting impression on American society is still felt today, as he was responsible for expanding government by adding social programs and support and helping create labor unions. The Roosevelt family tree continues to grow, although no one will likely ever outshine the memory of President Franklin D. Roosevelt.