George H.W. Bush was born on June 12, 1924, in Milton, Massachusetts to Prescott Sheldon Bush and Dorothy Walker Bush. Prescott, who was born in Columbus, Ohio, became a U.S. Senator for Connecticut from 1952 through 1963, having moved his family to Greenwich soon after George was born. Prescott was also a Wall Street banker after politics and resided in New York City until his death.

George H.W. Bush's genealogy includes his marriage to Barbara Pierce in 1945 in Westchester County, New York. Together, they had six children, including future president George W. Bush. George H.W. Bush moved his growing family to Texas to start an oil company and was a millionaire by the age of 40, which led to his involvement in politics, holding several prominent positions before becoming president in 1990. 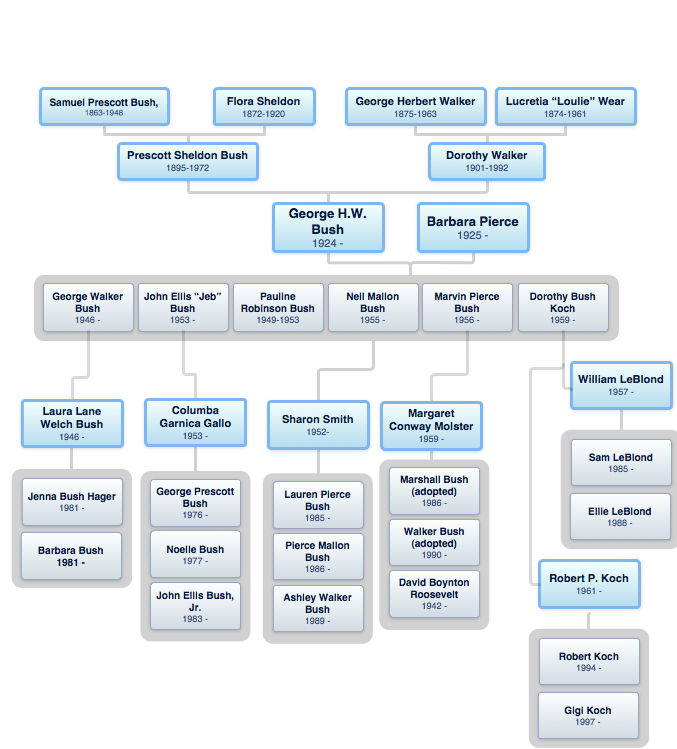 George H.W. Bush's family history boasts entrepreneurs, industrialists and politicians. George's grandfather, Samuel Prescott Bush, was a railroad executive and then the president of Buckeye Steel Castings Company in Ohio. Buckeye was first run by Frank Rockefeller, John D. Rockefeller's brother, until he retired in 1908 and turned it over to Bush. Samuel Bush was also the first president of the Ohio Manufacturers Association and co-founder of both the Columbus Academy and the Scioto Country Club. An athletic man, Samuel Bush played on one of the first college football teams.

George H.W. Bush's family genealogy can also include the accomplishments of his father, Prescott Bush, who was also a successful businessman. Prescott became vice president of A. Harriman & Co., which is the oldest and largest private banking firm in the U.S., in 1924 before becoming a partner when the company merged with the merchant bank Brown Bros & Co. in 1931. Prescott's move to Greenwich, Connecticut, came after he joined the United States Rubber Company managing the foreign division in 1925. The U.S. Rubber Company was one of the original industrial stocks chosen by Charles Dow for the Dow Industrial Average (later the Dow-Jones) in 1896.

George H.W. Bush's family history also includes his own accomplishments, which include being the youngest aviator in the US Navy, having enlisted in lieu of attending college after the attack on Pearl Harbor in 1941. In the Navy, George was assigned to Torpedo Squadron that was later based on the USS San Jacinto, famous for being victorious in the largest air battle of World War II, the Battle of the Philippine Sea. George flew 58 combat missions and received three Air Medals, the Distinguished Flying Cross, and the Presidential Unit Citation that was bestowed on the San Jacinto squadron.

George H.W. Bush family tree was continued when he met and married Barbara Pierce Bush, who was born in Flushing but raised in Rye, New York. Her segment of the Bush family tree includes her father, Marvin Pierce, who was the president of McCall Corporation, the publisher of women's magazines McCalls and Redbook. Also, Barbara's ancestor, Thomas Pierce, was the relative of the 14th president, Franklin Pierce. Her great-great-grandfather, James Pierce, Jr., was also a relative to Franklin Pierce. Barbara developed a love of reading from her youth, and she began the Barbara Bush Foundation for Family Literacy while First Lady, although she continued her work in this area after the White House.

George H.W. Bush family genealogy also includes his political achievements, beginning with his election to the House of Representatives for Texas. He was then appointed the Ambassador for the United Nations by President Nixon. George H.W. Bush also chaired the Republican National Committee, followed by the appointment as Chief of the Liaison Office to the People's Republic of China. For almost a year following that appointment, he was the Director of Central Intelligence. It was just four years later that he would join President Ronald Reagan in the White House for eight years as vice president. Then, he became the 41st president for a single term.

George H.W. Bush was president when the Berlin Wall fell and the Soviet Union collapsed. He is also remembered for his military strikes in the Persian Gulf during Desert Storm. He also enjoyed a record-high approval rating until the economy began to crumble, and forced to raise taxes, he left office less popular and after a single term. However, he was popular for promoting NASA and the completion of the Space Station Freedom. He also appointed Justices Clarence Thomas and David Souter to the Supreme Court. In 1993, the George H.W. Bush family genealogy can amend his name to read "Sir George H.W. Bush", after receiving honorary knighthood from Queen Elizabeth II. He is the third U.S. president to receive this honor, including Ronald Reagan and Dwight Eisenhower.