Thomas Jefferson, third president of the United States, was of English descent, but with deep and wide Virginia roots. His father and paternal grandparents were Virginians; his mother was born in London to English parents.

Jefferson's father, Peter Jefferson, was a surveyor and cartographer, as well as a Virginia land-owner and planter. He and Joshua Fry, another surveyor, created the Fry-Jefferson Map of 1751, which for the first time accurately showed the Allegheny Mountains, and noted the route of what was later called The Great Wagon Road from Virginia to Philadelphia. Jefferson's mother, Jane Randolph, is seldom mentioned in his writings, but she played a critical role in managing the household of this prominent family. When her husband died in 1757, she had eight children living, the oldest 17, the youngest only two years old.

Long before he became president, Thomas Jefferson played an influential part in Virginia colonial and revolutionary life - he was a lawyer, scholar, and statesman. He served in the Second Continental Congress and wrote the text of the Declaration of Independence. He also served as Governor of Virginia, American Minister to France, Secretary of State under Washington and Vice President under Adams. As President, he was responsible for the Louisiana Purchase, aided the Lewis and Clark expedition, and established West Point. 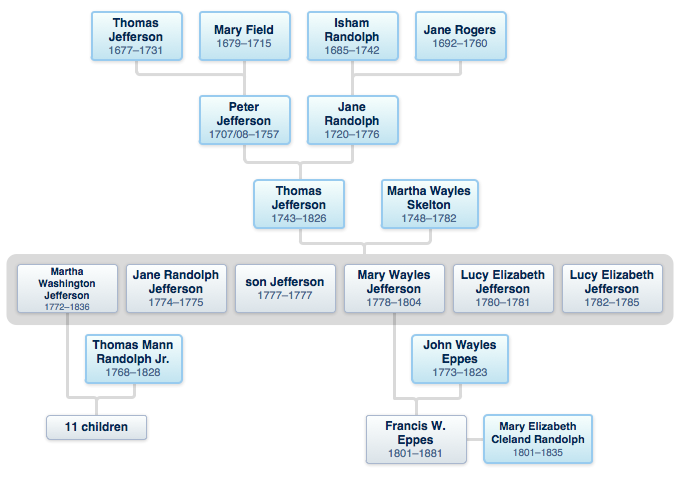 While Jefferson's father Peter Jefferson was responsible for building an impressive estate, Peter's own father (named Thomas) was also a Virginia planter. The president believed that his father's family was originally from Wales, near Mount Snowdon, but so far no definitive evidence to support this claim has been found. Although Jefferson moved in Virginia's elite social and political circles, he seems to have had very little interest in his own family history.

Jefferson's mother was a member of the Randolph family, which was an influential one in colonial society. The first Randolph to come to America, William Randolph, was born in 1650 in Warwickshire, England. He apparently followed his uncle, Henry Randolph, to the new world, some time before 1672. In 1674 he obtained his first land patent, and soon thereafter married Mary Isham, a wealthy widow and daughter of Henry Isham of Northamptonshire. William Randolph was a merchant and tobacco planter; he also served in the Virginia House of Burgesses and held the post of Attorney General of the colony.

Although Martha gave birth to six children, only two survived to marry and have children of their own. The oldest, Martha Washington Jefferson (known as Patsy), married her third cousin, Thomas M. Randolph. They had 12 children, of whom 11 survived.

The only other child of Thomas and Martha Wayles Jefferson to survive to adulthood was Mary Wayles Jefferson, who married her cousin, John Wayles Eppes. A lawyer and planter, Eppes also served as a Representative and Senator from Virginia. Mary and John Eppes were the parents of a stillborn daughter, a second daughter who died very young, and a son, Francis W. Eppes. Mary died when Francis was only three years old; John married a second time, to Martha Burke Jones.

Young Eppes was raised at Monticello, where developed an interest in educational matters. He later moved to Florida, where he served as a justice of the peace and also as mayor of Tallahassee. He was instrumental in the development of the institution that eventually became Florida State University.

No discussion of Thomas Jefferson's family is complete without information about the slave Sally Hemings and her children. Rumors surrounded the president during his lifetime and beyond, with many people asserting that he fathered one or more of her children. Over the years, a number of historical studies have been undertaken, and DNA samples from both Jefferson and Hemings descendants have been analyzed. A 1998 DNA study concluded that "the results of the study established that an individual carrying the male Jefferson Y chromosome fathered Eston Hemings (born 1808), the last known child born to Sally Hemings.

Since several other Jefferson males with the same chromosome lived or visited in the area, it cannot be proven that Thomas Jefferson was the father of Sally Hemings's children, but there are many indications that this assumption is correct. Various branches of the family and more than one historical foundation have studied the evidence and come to different conclusions, however, and some doubt yet remains. What has been proven, however, is that the Jefferson and Hemings lines are related through a male Jefferson.

- - - - - -
Note: the list of Martha Jefferson Randolph's children, as well as the chart showing Thomas and Martha Wayles Jefferson's children include two cases of children with the same name. This was a relatively common practice at the time, when the first child bearing a particular name died young.
- - - - - -