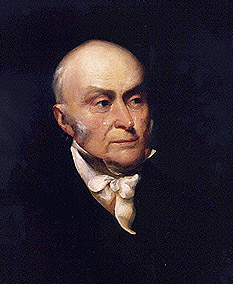 John Quincy Adams was the sixth president of the United States, serving from 1825-1829. The John Quincy Adams family tree includes a father who also served as president; John Adams, was the second U.S. president, and First Lady Abigail Adams was his mother. The John Quincy Adams family history represents a long line of New Englanders, having been born in Braintree, Massachusetts himself in 1797. Adams was a member of the Federalist party when he started his political career in the United States Senate and switched to the Democratic-Republican and National Republican parties throughout his many years working in the federal government. During the latter part of his career, he also was a member of the Anti-Masonic and Whig parties. Adams was best known for his commitment to foreign policy while serving as president, always keeping his focus on the Republican values of his home country. This president was also remembered for his 17 years as a Massachusetts Representative in the United States House after his presidency, which left an even larger mark on his legacy than his actual time as president, especially in the eyes of many historians today. Adams to date is the only president to sport such a resume. The John Quincy Adams genealogy is also a significant part of this president's history, as members of his family were instrumental in creating the country that is the United States of America today. 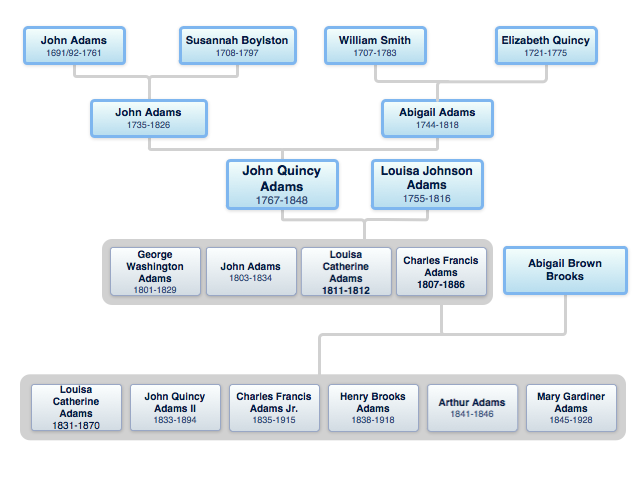 John Quincy Adams was born in Braintree, Massachusetts on July 11, 1767. John Quincy Adams genealogy primarily takes place in Braintree at his parent's home, since Adams also lived there during his adulthood. The John Quincy Adams family tree included a wealth of politics, which allowed the young Adams to grow up in an environment that valued education, politics, world affairs and religion. Adams often went along with his father on diplomatic trips, and he even served as a secretary of foreign affairs when he was very young. He was well educated, earning a degree at Harvard after spending time at Leiden University in Europe. Although he briefly practiced law after graduating college, he found himself drawn to writing and public speaking, a predecessor to his life of public office that was soon to come, just like others in the John Quincy Adams family history.

While on a diplomatic trip to London, England, in 1795, John Quincy Adams met Louisa Johnson. Johnson was the daughter of an American businessman - very wealthy, but plagued with health issues like migraine headaches and fainting issues. The two were married on July 26, 1797 at Hallows Barking parish in London; Adams was 30 and Johnson was 22 at the time. The two remained married until Adams died in 1848, and they had four children together: George Washington Adams, John Adams II, Charles Francis Adams and Louisa Catherine Adams, who died in infancy.

In 1802, John Quincy Adams began his official political career with an appointment to the Massachusetts State Senate. Adams lost his first bid for the United States House of Representatives, but was elected as a Federalist to the U.S. Senate a short time later. Adams broke from the Federalist party in 1808, shortly after his removal from the senate a number of months prior to the end of his term. Adams then served for both James Madison and James Monroe, first as the first United States Minister to Russia and then as Monroe's Secretary of State.

At the end of this term, Adams ran for and won the U.S. presidency, serving one term as the sixth president of the United States. However, his victory was not without controversy. Adams actually lost the popular vote to his running mate and popular war hero Andrew Jackson. However, the House of Representatives chose Adams to serve as the next president when the decision went to them. Jackson accused Adams of running a corrupt race and promised to beat him during the next election four years later -which he did.

Just two years after his one-term presidency, Adams was elected to the U.S. House of Representatives, where he served for 17 years. Adams died in office, suffering a stroke in the House Chamber at the age of 80. He died just two days later. Adams was originally interred at the Congressional Cemetery in Washington D.C., but his body was eventually moved to the Hancock Cemetery in his hometown of Braintree, which is now known as Quincy.