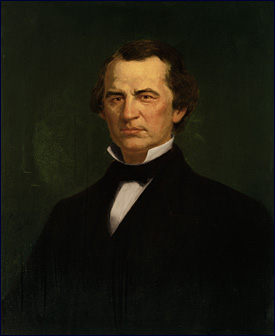 President Andrew Johnson's family history and personal story are proof that, although you may not know where you come from, in the United States it is all up to you to make what you want of yourself. Not much is known of President Andrew Johnson's family history past his father, Jacob Johnson. Andrew was born to very meager circumstances in Raleigh, North Carolina on December 29, 1808 to Jacob Johnson and Mary Polly McDonough. Jacob and his wife were poor laborers at Casso's Inn in Raleigh. As a young child Andrew lived a simple life as a laborer's son, never having the means to receive an education. His father taught him great life lessons of hard work and caring for those around him, most notably with one heroic event that resulted in the death of his father, when Andrew was a small boy. After his father's death Andrew's mother Polly apprenticed he and his brother to a tailor, whom they ran away from soon after. He then learned to fend for himself and later, through the love and patience of his wife, learned to read, held local public and eventually state and federal offices. 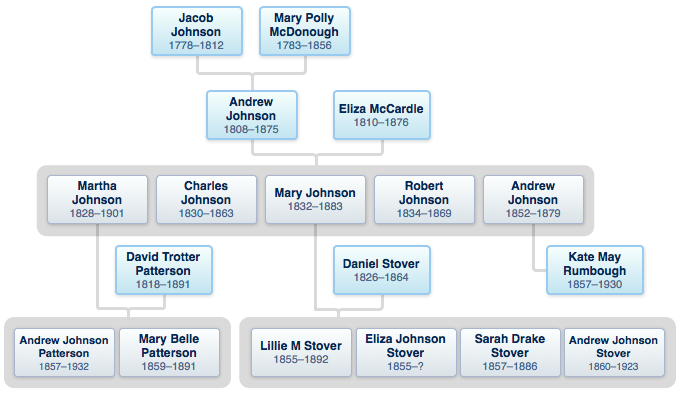 The Johnson family tree may not have extensive amounts of discovered ancestry but the descendants of Jacob and Mary Polly McDonough are numerous, with one branch that is well known to American citizens: that of President Andrew Johnson. Andrew Johnson, born on December 29, 1808, was the second of two sons to Jacob Johnson and Polly McDonough. There is much debate as to the parentage of Jacob Johnson, some historians believing he himself was the immigrant ancestor from England, others stating his grandfather, and possible namesake sailed to the United States. Yet another, historian Reverend Nash A. Odom believes Peter Johnson sailed to the colonies in 1760, and a family of ministers, one of which was Jacob's father, moved to Raleigh, North Carolina. Although there is much confusion as to the predecessors of President Andrew Johnson, his immediate family shaped the backbone of his life, which as a poor laborer's son most likely did not include presidential aspirations.

Jacob and his wife, commonly known as Polly, worked at Casso's Inn in Raleigh, North Carolina. Andrew and his brother William were born here, to humble circumstances. Their mother worked as a weaver and a clothes washer. Their father worked odd jobs at the inn and in the town: a hostler at the inn, a militia captain, a sexton for the Presbyterian Church, and as a porter for the State Bank of North Carolina. It is also said that he was the sole bell toller in Raleigh. While working at the inn, Jacob, not seeking fame nor fortune, became a local hero, saving the lives of two fishermen who had capsized their fishing skiff on Walnut Creek in 1811, when Andrew was nearing four years old. With no thought of his own safety, Jacob rescued these two men, dying several weeks later, ironically while ringing the funeral bell at the capitol building.

Polly was very distraught at the loss of her husband, both emotionally and physically. Her children were not educated and knowing she could not afford to send them to school, she apprenticed them to a tailor, learning a trade that would eventually support them. Andrew and his brother ran away from this indentured servitude and created their own paths. Andrew opened his own tailor shop at 17 years of age in Greeneville, Tennessee and met and married Eliza McCardle. Eliza saw potential in Andrew and taught him to read and write. 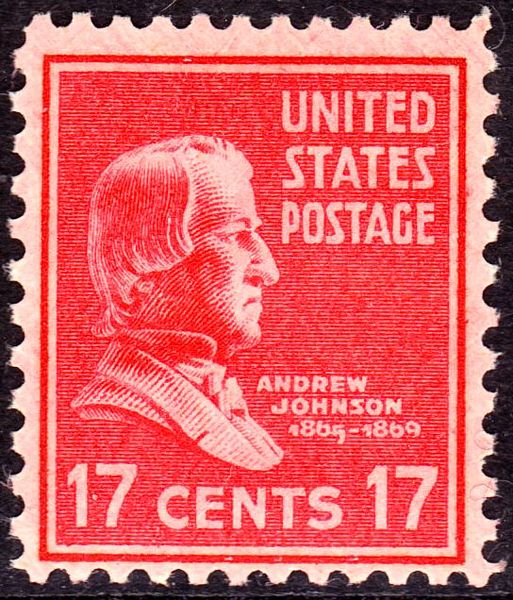 Johnson quickly became interested in politics holding several local and state positions: alderman, mayor, State legislator, State senator, U.S. representative, Governor of Tennessee and U.S. Senator. He was never a party loyalist and favored the common man, not plantation aristocracy. As a southern born man and politician, secession created a great conflict for him. He himself owned eight slaves and accepted the existence of slavery but Johnson believed secession to be unconstitutional, and fought for preservation of the Union, amid threats to his life. Lincoln appointed Johnson as military governor of the state of Tennessee and two years later nominated him as his running mate, seeking to gain allegiance with pro-war Democrats.

After the assassination of Lincoln in April 1865, Johnson was named president and the responsibility of Reconstruction and maintaining the Union fell upon him. He attempted to adopt Lincoln's moderate view of reconstruction ratifying the 13th Amendment in 1865, abolishing slavery followed by the 14th Amendment granting citizenship to all but American Indians. Along with Reconstruction of the Union, Johnson also agreed to the purchase of Alaska from Russia. Johnson's presidency quickly became stained with what he is known most for today: the first president to be impeached while in office. Due to his dismissal of Secretary of War Stanton, violating the Tenure of Office Act of 1867, the House of Representatives voted to impeach him. He was saved from being ousted from office by one vote, finishing out his term. Johnson then returned home to Greeneville, Tennessee and suffered a stroke in 1875, killing him. Although President Andrew Johnson's family name is tainted with impeachment, as a boy and a man he was able to prove what the American dream is all about: coming from nothing to grow into great accomplishment.