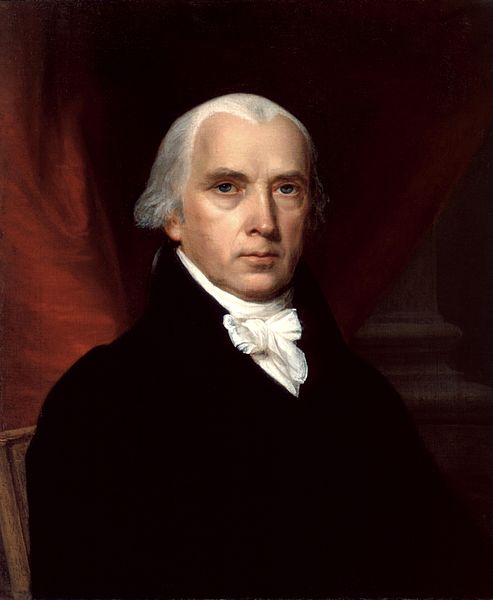 "A well-instructed people alone can be permanently a free people."

"If men were angels, no government would be necessary."

James Madison, Jr. was born on March 16, 1751 at Belle Grove Plantation near Port Conway, Virginia of King George County. His great-great-grandfather, the 1st immigrant ancestor and progenitor of the early American Madison family, was Captain Isaac Madison who was born in 1590 in London, England. He migrated to American and settled in Virginia. He acquired land and became a planter and lived with his family on his plantation until his death in 1624.

James, Jr. was the eldest son of James and Nelly Madison, Sr. His father, James, Sr., (1723-1801) was a tobacco planter who grew up on an estate in Orange County, Virginia, which he inherited. He later acquired additional property and, with 5,000 acres, became the largest landowner and leading citizen of this County. His mother, Nelly Conway Madison (1731-1829), was born at Port Conway, Virginia, the daughter of a prominent planter and tobacco merchant.

The land, in the Piedmont of Virginia, was acquired by Madison's grandfather, Ambrose Madison, and his brother-in-law Thomas Chew, in 1723. Ambrose and his family moved to the plantation, then known as Mount Pleasant, in 1732. When Ambrose died only six months later, poisoned, according to court records, by three African American slaves, his wife Frances managed the estate. In time she was assisted by their only son, James Madison, Sr., later known as Colonel Madison.

James, Jr. inherited Montpelier after his father's death in 1801 and retired there after his second term as president came to an end in 1817. In 1797, after his first retirement from politics, he added a thirty-foot extension and a Tuscan portico. Single-story flat-roofed extensions were built at either end of the house and a Drawing Room was created out of two of the existing rooms in around 1810. James Madison died in 1836 and is buried in the family cemetery at Montpelier. His widow, Dolley Madison, moved back to Washington, D.C. after his death and sold the estate in 1844. Montpelier was permanently staffed by an enslaved African population which fluctuated in size but averaged approximately 100 during James Madison's tenure as owner. 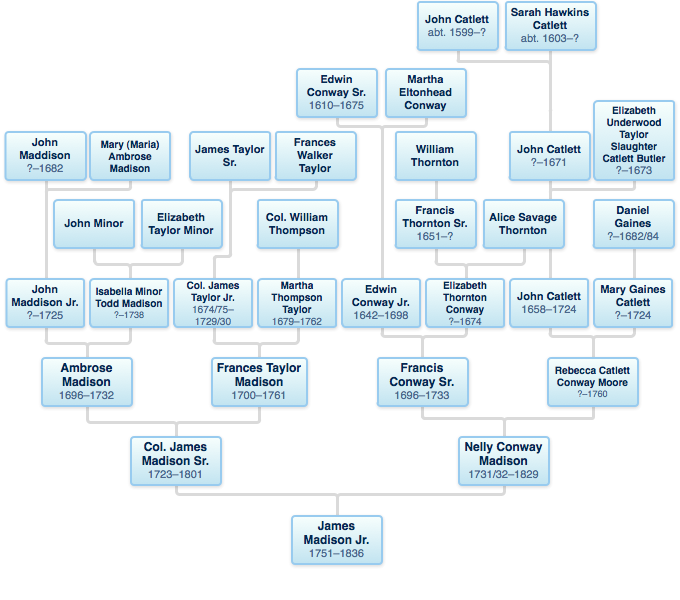 Madison's parents married in 1743 and had 12 children, nine of which survived. However, Madison had three brothers and three sisters who lived to adulthood (by whom he had more than 30 nieces and nephews as follows):

Ambrose Madison (1755-1793) - planter and captain in the Virginia militia, looked after the family interests in Orange County; named after his paternal grandfather.

William Madison (1762-1843) - veteran of the Revolution and a lawyer, he served in the Virginia legislature

From ages 11-16, a young "Jemmy" Madison had private studies under Donald Robertson, a Scottish teacher at the Innes plantation in King and Queen County, Virginia. He studied mathematics, geography, and modern and ancient languages and became especially proficient in Latin.

At age 16, he was tutored for 2 years for college preparation. He studied privately under the Reverend Thomas Martin. In 1769 he enrolled at the College of New Jersey (now Princeton University). Madison graduated in 1771, after diligence and long hours of study. His studies included Latin, Greek, science, geography, mathematics, rhetoric, and philosophy. During his college studies, great emphasis was placed on speech and debate. After graduation, Madison remained at Princeton to study Hebrew and political philosophy under university president John Witherspoon before returning to Montpelier in the spring of 1772. Out of his interest in public policy, Madison also studied the law.

Almost 20 years later, he decided to marry. On September 15, 1794, James Madison married Dolley Payne Todd, a widow, in what is now Jefferson County, West Virginia. Madison adopted Todd's one surviving son, John Payne Todd. Dolley Payne was born May 20, 1768, at the New Garden Quaker settlement in North Carolina, where her parents, John Payne and Mary Coles Payne, lived briefly. Dolley's sister (Lucy Payne) had married George Steptoe Washington, a nephew of President George Washington. James and Dolley never had children together. For marrying Madison, a non-Quaker, she was expelled from the Society of Friends.

James Madison, Jr., is known as the "Father of the Constitution" and the author of the Bill of Rights. He has been referred to as the chief architect of the most important political experiment in human history. Madison also wrote over a third of the ''Federalist Papers'', a series of 85 newspaper articles, published throughout the 13 states. These articles explained to the general public how the proposed Constitution would work. Thomas Jefferson referred to the ''Federalist Papers'' as "the best commentary on the principles of government, which ever was written" These papers are still used as a primary source today for jurists and legal scholars interested in the original understanding of the Constitution.

As one of our founding fathers, James Madison became the 4th President of the United States. As with Thomas Jefferson, his most significant contributions to American history came BEFORE his presidency. The U.S. Constitution is the world's oldest written constitution, and is considered to be the most important document ever written in the history of freedom. Since then, this historic document has been a model for other constitutions worldwide.

One notable and famous collateral descendant is Barack Obama, our 44th President who is related on his wife Dolley's side of the family.