James Monroe, born in Westmoreland County, Virginia on April 28, 1758, was elected as the fifth president of the U.S. in 1816 and went on to serve a second term from 1820 through 1824. James Monroe attended the College of William and Mary and practiced law. James Monroe's family history dates back to 1647, when Royalist Captain Andrew Monroe fled England for Virginia after King Charles I was beheaded. The James Monroe family tree then begins in Westmoreland County, Virginia, on a 200-acre farm that, in two generations, grew to 1,100 acres.

President James Monroe's genealogy includes his parents Spence Monroe and Elizabeth Jones Monroe. Spence Monroe received half the 1,100 acre farm from his father, Andrew Monroe III. Judge Joseph Jones of Fredericksburg, maternal uncle to the Monroe children, was a key part of James Monroe's family history, as he helped the Monroe siblings survive after their parents died. It was Judge Jones who enrolled James Monroe in William and Mary. James Monroe's family tree continued when he married Elizabeth Kortright, a New York socialite, and together they produced two daughters and a son who died in infancy. 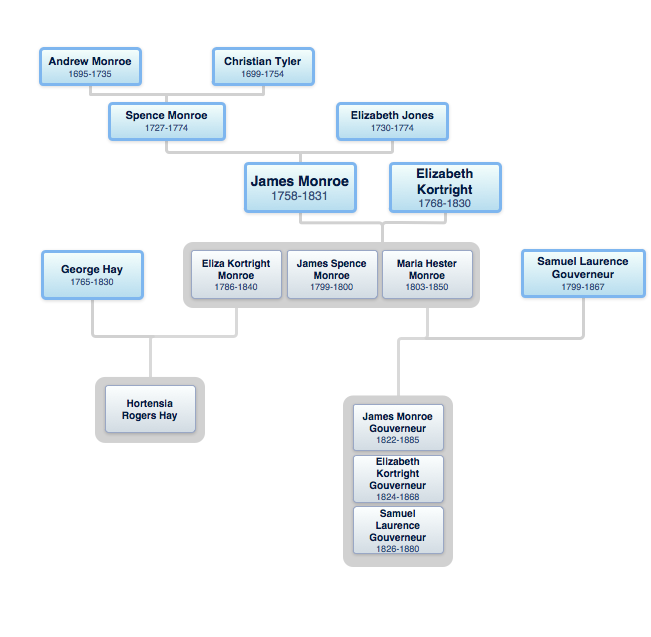 James Monroe is one of two Revolutionary War veterans who served as president and he left an important legacy behind. James Monroe's family history is closely linked to America winning independence from Britain, especially since James Monroe left William and Mary at 18 years old to join the Continental Army and fight in 1776. He joined as a lieutenant the Third Virginia regiment and was promoted to captain and then major as an aide de camp to General William Alexander "Lord Stirling." In 1780, James Monroe went back to William and Mary to finish studying law, and he won a lifetime friend and mentor out of Thomas Jefferson, who was governor at the time.

James Monroe's family tree is filled with patriots who denounced the tyrannous rule of Britain, including Spence Monroe, James' father. He signed Richard Henry Lee's 1765 Westmoreland Protests against the British Stamp Act. The protest included a boycott of all British imports and was so effective that the British Parliament repealed the stamp tax. Spence Monroe had become a cabinet maker and builder to help supplement the income he earned farming the 600 acres he inherited. Judge Joseph Jones, James Monroe's maternal uncle and guardian after his parents died, was a member of the House of Burgess and served on the Continental Congress and the committee to declare Virginia independent from Britain. He served with Thomas Jefferson and Patrick Henry, and appointed George Washington commander and chief of the Continental Army.

These events greatly impacted Monroe, and he went on to get elected to the Virginia Legislature in 1782 and then to the Confederation Congress in 1783. James Monroe's genealogy would grow after he became enchanted by the lovely Elizabeth Kortright, whose father Lawrence Kortright was a British army officer who made his fortune during the French and Indian War privateering. The couple got married in 1786, with plans to settle in Fredericksburg, Virginia, while James Monroe practiced law. Of course, that dream of a quiet life didn't last, and in 1794, the Monroe family, which included a daughter Eliza, headed to Paris as James Monroe was appointed minister to France by President George Washington.

James Monroe's family history continued to be made when the family arrived in France in the height of the French Revolution and found that Madame Adrienne Lafayette, wife of the Marquis de Lafayette, had been imprisoned and sentenced to death by guillotine. James Monroe had already used his status in Paris to get several imprisoned Americans released and hesitated to get involved. Elizabeth Monroe felt strongly about her good friend and insisted on visiting Madame Lafayette herself. So she rode through a mob of Parisian peasants to Plessis prison, near the Sorbonne. The French soon decided to free her due to the interest of the American Minister's wife, and the Monroes had lifelong friends of the Lafayettes.

James Monroe was elected president in 1816 and was quickly faced with the First Seminole War. The Seminole Indians came up from Spanish Florida to invade Georgia, and Andrew Jackson was sent to remedy the situation. Although Jackson invaded Spanish Florida against orders, it led to Spain ceding Florida to the U.S. in the Adams-Onis Treaty. Also, the Missouri Territory wanted to join the Union as a slave state, but was repeatedly turned down. The Missouri Compromise was reached in 1820 with a bill that paired Missouri, still a slave state, with a free state, Maine, and prohibited slavery west and north of Missouri. The other major contribution as president was the Monroe Doctrine in 1823, which forbid European power countries from expanding their empires or intervening in the western hemisphere.