Future President Ronald Reagan was born on February 6, 1911, in the small Illinois town of Tampico to Jack and Nelle Reagan. Ronald Reagan's family tree can be traced back to County Tipperary, Ireland, where Michael O'Regan, Ronald's great-grandfather, toiled as a tenant farmer early in life before moving to London in 1852. This is where Michael O'Regan met and married Catherine Mulcahey, an Irish refugee, and they moved to Illinois to settle in America. The move to America prompted Michael O'Regan to Americanize his surname to Reagan.

Ronald Reagan was the youngest, with an older brother Neil "Moon" Reagan. Ronald Reagan's primary ambition in life was to be an actor, and he played in many films and television shows, although his natural charisma and leadership qualities eventually led him into politics, first as the governor of California and then to the White House. 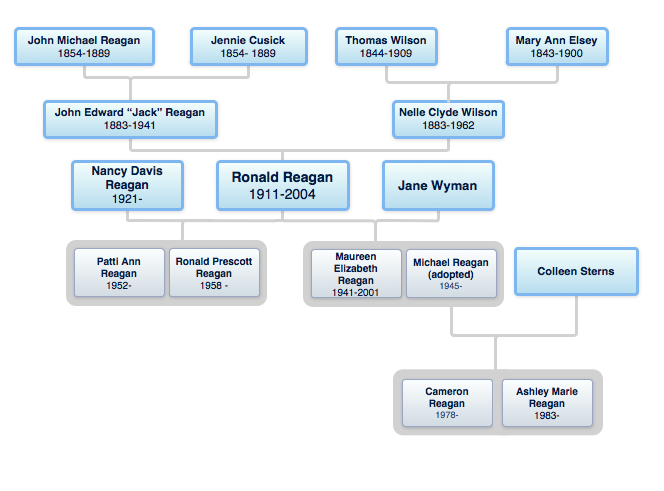 Ronald Reagan was born to a working-class family that had been working hard for generations, mostly in farming as his early Irish ancestors did. Although Ronald Reagan's family history begins his life in Tampico, Illinois, where the family lived above a tavern in a small apartment, after several moves to other Illinois towns, the Reagans moved back to Tampico in 1919 and lived above the H.C. Pitney Variety Store, where Ronald Reagan's father worked. However, the store closed the following year, and the Reagan family moved for the final time to Dixon, Illinois, where Ronald and his brother Neil grew up.

Ronald Reagan's family genealogy includes his marriage to the famous actress Jane Wyman in 1940. They met as co-stars when they acted in the film Brother Rat. They had three children, one who died as an infant and one who was adopted before divorcing in 1949, making Ronald Reagan the only president to ever be divorced. Ronald Reagan's family tree grew again when he met another actress, Nancy Davis (born Ann Frances Robbins). At the time, Ronald Reagan was president of the Screen Actors Guild and was actively involved in providing names to the FBI of potential "red" or communist supporters within Hollywood. He also testified several times in HUAC (House Committee on Un-American Activities) hearings. Nancy Davis went to see Ronald Reagan because her name was on the blacklist mistakenly. Although it turned out she was mixed up with a different Nancy Davis, the incident sparked a romance that turned into a loving marriage in 1952.

Nancy Davis Reagan's family history includes being born in New York City to famous film and stage actress Edith "Lucky" Luckett. Her father was a car salesman named Kenneth Robbins, although the couple was already separated when Nancy was born. Nancy's mother continued her acting career to support her, and Nancy, as a result, was sent to live with her aunt and uncle, Virginia and Audley Gailbraith, in Bethesda, Maryland. This arrangement lasted six years, with Edith Luckett visiting as her busy acting schedule allowed. In 1929, Edith met and married Loyal Davis, who formally adopted Nancy (who changed her name to Nancy Davis), and Edith quit acting to stay at home. Nancy always considered him her father. Loyal Davis was a neurosurgeon and a well-known conservative in political circles.

Nancy and Ronald Reagan's family genealogy continued with their two children, Patti and Ronald. As Ronald Reagan moved from Hollywood into politics as the governor of California, he also changed his political party from democrat to republican. In 1980, Ronald Reagan defeated incumbent Jimmy Carter and served two terms as the 40th president of the U.S. Ronald Reagan's family tree almost suffered an early loss when an assassination attempt was made in 1981 by John Hinckley. Ronald Reagan is remembered for appointing Sandra Day O'Connor, the first female Supreme Court Justice. He is also remembered for significantly cutting taxes to bolster the economy and for reestablishing diplomatic relations with the Vatican. Nancy Reagan is best remembered for creating the drug prevention campaign "Just Say No".

Ronald Reagan's family history includes his children with Nancy, Patti and Ronald, and the fact that they didn't share the political ideals and viewpoints of their parents. Both Patti and Ronald were outspoken about their progressive and liberal views, although both made amends with their parents after Ronald Reagan was diagnosed with Alzheimer's disease. Ronald's children with Jane Wyman, Maureen and Michael, both shared Ronald and Nancy's more conservative political views. All the Reagan children have been involved in radio or television in some capacity, continuing that tradition of the Ronald Reagan family genealogy.