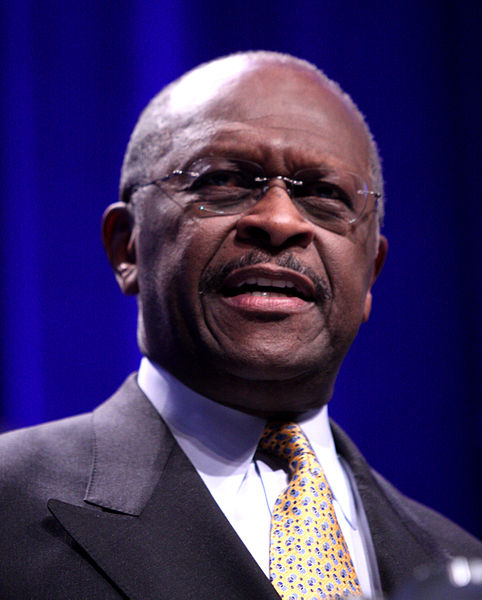 Herman Cain is a presidential candidate with an extensive resume in the business world. His former post as CEO of Godfather's Pizza and work with the Federal Reserve Bank of Kansas City have earned him a reputation as a savvy financial manager. Cain is also a columnist who writes a weekly piece distributed by the North Star Writers Group and a minister at the Antioch Baptist Church North. Cain's family history is one that truly exemplifies the American Dream. Born to working-class parents who barely made ends meet, Cain saw his family realize the dream of home ownership and college degrees for both Cain and his brother. In the political arena, Cain may be best known as the individual who went toe-to-toe with then President Clinton on the issue of healthcare reform, while Cain was president of the National Restaurant Association. From that post, Cain moved into his position on the Board of Directors for the Federal Reserve Bank of Kansas City, and eventually, into the public role as presidential candidate, vying for a spot on the Republican ticket in 2012. Cain currently lives in the suburbs of Atlanta with his wife, Gloria Cain. His two children, Melanie and Vincent are now grown and living on their own.

Some interesting facts about Herman Cain include:

Although there are currently no publically available genealogy lines for this candidate, Herman Cain was born in Memphis, Tennessee on December 13, 1945. His parents, Lenora and Luther Cain, were fairly poor at the time. Luther Cain Jr. worked three jobs to make ends meet for the family, as a chauffeur, barber and janitor. His mother also worked as a cleaner in the domestic services industry. The family worked hard to save enough money to buy their own house, a dream that was eventually realized when Luther was able to purchase a modest brick home in Atlanta, Georgia. Cain's parents also wanted to see both of their children, Herman and his younger brother Thurman, graduate from college. Herman Cain graduated from Morehouse College with a degree in mathematics in 1967, and Thurman graduated from Morris Brown College a few short years later.

Herman Cain went on to graduate school at Purdue University, where he earned a master's degree in computer science. While at Purdue, Cain also worked full time for the Department of the Navy, developing fire control systems for ships and planes. Once Cain finished his studies at Purdue, he returned to Georgia, where he took a job with the Coca-Cola Company as a business analyst. After enjoying success there, Cain moved to the Pillsbury Company, where he earned a position as vice president in a matter of years. Eventually, Cain left Pillsbury to work at a subsidiary of the company, Burger King. Cain enjoyed success at this new position as well, and after a stint at another Pillsbury Company, Godfather's Pizza, he resigned his post to become CEO of the National Restaurant Association.

Cain was working in this current position when he challenged President Clinton at a town meeting. While Clinton was reassuring those attending the town hall meeting - as well as television viewers - that his proposed healthcare reform would not harm American business owners, Cain spoke up and said, "Quite honestly, Mr. President, your calculations are incorrect. In the competitive marketplace, it simply doesn't work that way." Cain's words were broadcast across the country and earned him the distinction by Newsweek as the primary saboteur of Hilary Clinton's healthcare proposal.

Cain credits much of his success in the professional world with the strong work ethic passed down by his parents. Even though Cain's mother and father worked very hard to support their family, they knew that they were providing a better life to their children than they had, and that hard work and perseverance would pay off in the country where they lived. Despite the fact that Cain grew up during a time of segregation in the Deep South, Cain's parents were able to realize their dreams of home ownership and college educations for their children. They kept their faith in their country and their faith in God, two values that have been passed down to shape the person of Herman Cain today.