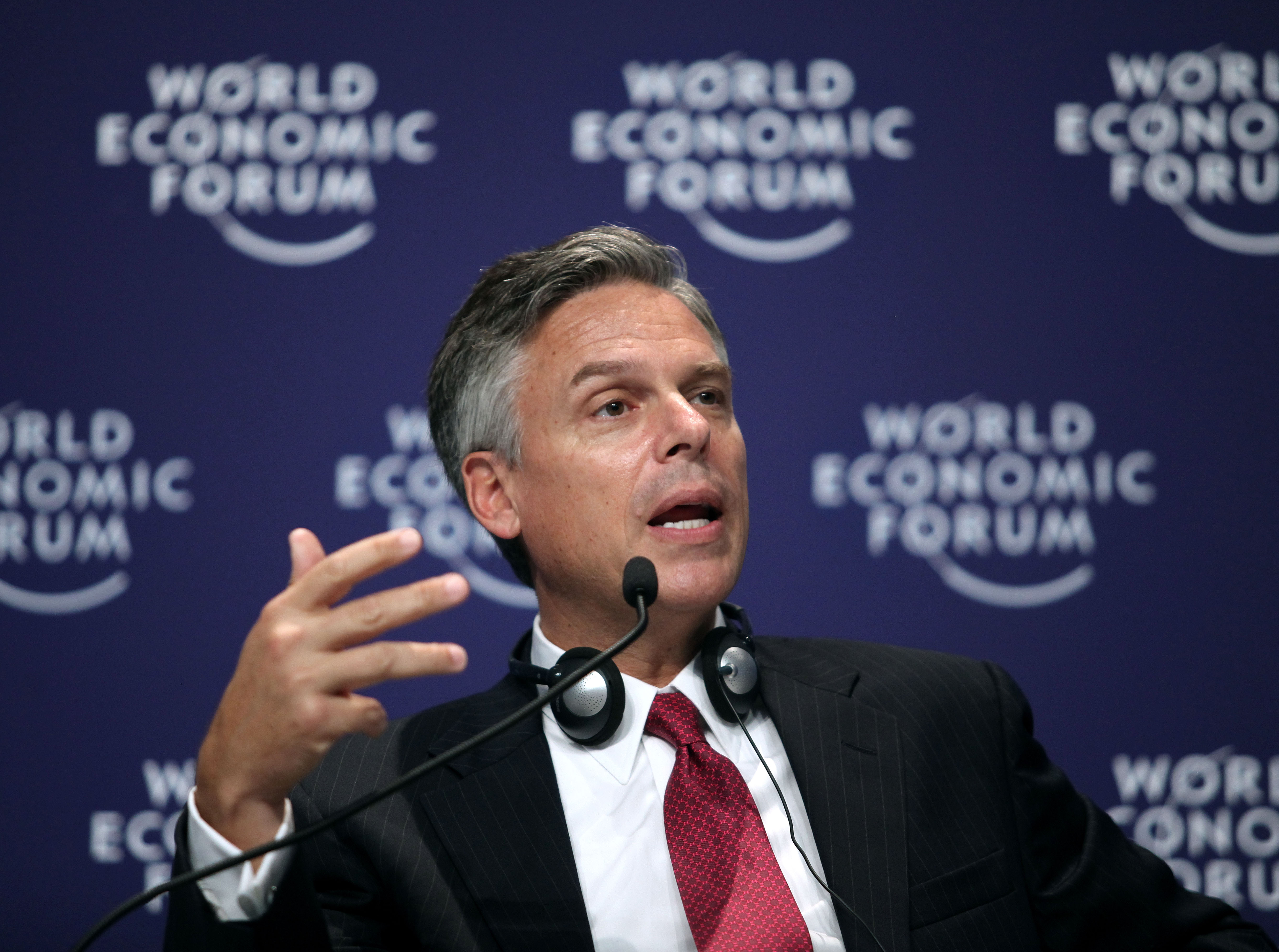 
Jon Huntsman Jr. is known as an American ambassador and politician who has served two terms as the Governor of Utah. Born the oldest of nine children to a billionaire businessman and his wife, Huntsman's childhood was filled with corporate and political ties. His family history is also strongly rooted in the Church of Jesus Christ of Latter Day Saints; his mother, Karen Haight Huntsman, was the daughter of LDS Church apostle David B. Haight. His father is the great-great-grandson of early LDS Church leader Parley P. Pratt. Huntsman Jr. is also a third-cousin, once removed, of another presidential candidate from the Mormon Church, Mitt Romney. John Huntsman Jr. is currently married to wife Mary Kaye, and they reside in Salt Lake City, Utah. The couple has seven children: Mary Anne, Abigail, Elizabeth, Jon, William, Gracie Mei and Asha Bharati. Huntsman has served in both the corporate and political realm, as a business executive for both his family business Huntsman Corporation and the Huntsman Cancer Foundation. His political experience dates back to 1982, when he began working as a staff assistant to Ronald Reagan. Since that time, Huntsman has worked for three more presidents, including George H.W. Bush, George W. Bush and Barack Obama.

There are a number of interesting facts about John Huntsman Jr., including:

Jon Meade Huntsman Jr. was born in Palo Alto, California on March 26, 1960. His father was a wealthy businessman by the time Huntsman was born, as the founder of Huntsman Corporation, a company that invented Styrofoam egg containers and the clamshells used for McDonalds sandwiches. The family also boasts deep roots in the Mormon Church, with family members through generations holding high-ranking positions within the LDS hierarchy. Huntsman's grandparents on his father's side were Alonzo Blaine Huntsman and Sarah Kathleen Robison, both born in Fillmore, Utah. His mother's parents were David Bruce Haight, an LDS Church apostle, and Ruby M. Olsen, also of Fillmore. The family line can be traced through the church, although some generations were less devout than others. Today, John Huntsman Jr. and his wife Mary Kaye are also active members of the Church of Jesus Christ of Latter Day Saints.

Huntsman grew up in an environment boasting both corporate and political influences. His father, Jon Huntsman Sr., was a savvy businessman who had made a name for himself in the corporate world before he hit his mid-life crisis. Huntsman Sr. built an empire in the Huntsman Corporation, and though there were some rocky time throughout the company's history, Huntsman Sr. was always there to fight for his business and do whatever necessary to keep in afloat. In some cases, this even meant putting his houses up for collateral or taking out high-interest loans to gain enough capital to effectively grow the business. However, Huntsman's zeal for his company always helped him pull the company back in the black in the end, and today, the family patriarch is retired and overseeing the continued success of his business through his second son's leadership.

Jon Huntsman Jr. has also put time into the family business, working alongside his father and brother in the middle of the 1980s to bring the company back up to par. However, the bulk of the work in the Huntsman Corporation has been left to John's younger brother Peter, as John pursued a career in politics and diplomacy from a relatively young age. After his stint as a staff assistant for President Reagan, Huntsman went on to serve under George H.W. Bush as Deputy Assistant Secretary of Commerce for trade development and U.S. Ambassador to Singapore. Under George W. Bush, Huntsman served as Deputy Unites States Trade Representative. He eventually resigned to become the 16th Governor of Utah, where he served two terms. He then returned to the international realm, serving as the Ambassador to China under President Barack Obama. This year, Huntsman resigned that position when he announced his candidacy for President of the United States.