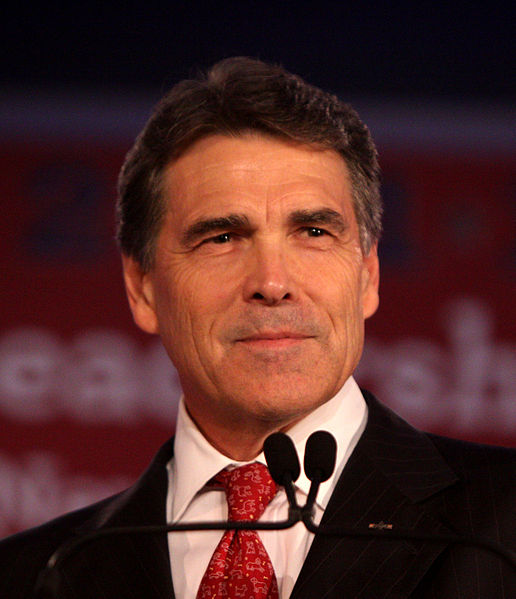 James Richard Perry, the current governor of Texas, was born in a rural farming community called Paint Creek in western Texas on March 4, 1950 and is currently 61 years old. Rick Perry is a republican, although he began his political career as a member of the Democratic Party. Perry, who served in the Air Force during the 1970s and was honorably discharged as a Captain, moved back to help his father on the family farm. Perry, an outgoing and well-known member of his community decided, at the urge of family and friends, to run for the state legislature in 1984. At this time, Perry was a democrat, and he won the first election along with two subsequent elections.

However, Perry's views began to change and, he switched political parties and decided to run for the State Agriculture Commissioner seat in Texas and remained for two terms. Next, however, Perry ran for Lieutenant Governor and won. When George W. Bush was elected president, Perry took over as Governor. Perry won the next terms on his own merit and is now the longest serving governor in the state's history. Perry's political platform for president consists of lowering taxes, cutting government spending, creating jobs like he has done in Texas (40 percent of new jobs created since 2009 were in Texas), repealing Obamacare while promoting a better healthcare system, and keeping the military strong.

Rick Perry's family history is homegrown in his native state of Texas. Born in the small farming town of Paint Creek, Rick Perry is a fifth-generation Texan. Rick does have ancestors who were members of the Choctaw Tribe, specifically his great-great-great grandfather Icy Abels, from his mother's side of the family tree.

On the other side of the family tree, on his father's side, Rick's great-great-great grandmother, Jane Perry Killian, moved to Texas with her parents in 1832 while Texas was still a Mexican territory. This branch of the family came from Tennessee to settle in Texas.

Rick's father, Joseph, was part of the Air Force and served as a tail gunner during World War II. Joseph Perry flew over 35 missions during the war in Europe and inspired Rick to join the Air Force years later in 1972. Rick got to the rank of Captain during his five-year stint in the Air Force. Rick flew the C-130, a military transport plane, to various parts of the globe, including North Africa, Central America and Europe before being honorably discharged and returning home to work on the family farm with his father.

Initially, Rick's parents were just tenant farmers, which is why the family didn't have indoor plumbing. Amelia, Rick's mother, sewed clothes for her family, and everyone bathed in a simple washtub. The local school had a class of 13, of which Rick was a member and graduated in 1968. Despite the rural landscape, Rick played on the football team (six boys) and was an avid member of the Boy Scouts, becoming an Eagle Scout during his teenage years.

Rick has paved a new path for his family history, as he was the first to go to college and earn a degree. Rick attended Texas A&M University, graduating with a degree in Animal Science because he wanted, at the time, to go on and become a veterinarian.

Rick's wife, Anita Thigpen Perry, is also a west Texas native and became a nurse after growing up observing her father, Dr. Joe E. Thigpen, constantly interacting with his nurses. Her father was a family doctor for the area, and she admired the role his nurses played in his practice. Anita's mother is a social activist named Beunis Ratliff Thigpen, and Anita has three siblings. Although Anita and Rick met during elementary school at a piano recital, they had their first date during high school, and then the couple reconnected after his time in the Air Force and married in 1982.

Even though Anita left her nursing job after Rick was elected first as the Texas Agriculture Commissioner and onward to the governor, making her First Lady of Texas, she still maintains an active role in healthcare. The Texas Tech University Health Sciences Center renamed the nursing school in 2008 to Anita Thigpen Perry School of Nursing. Also, she founded the Anita Thigpen Perry Endowment at the San Antonio campus and is the founder of the Texas Conference for Women. This conference has since become a highly successful annual event that encourages professional development, community, personal growth and healthcare among women professionals in the industry.

Rick is already the longest tenured Texas governor in the state's history, and he is hoping to further stamp his family history with great accomplishments by taking on the 2012 presidential election. If all goes well, Rick and Anita, along with their two children Griffin and Sydney, hope to be moving for the first time away from their home state of Texas and into the White House.