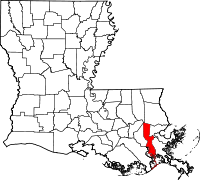 Different vital records are handled by different departments in Jefferson Parish. The Clerk of Courts office in Gretna distributes marriage licenses and records. To contact them, dial (504) 364-2900, or contact the Marriage License Department by email at marriageinfo@jpclerkofcourt.us . To obtain birth certificates, visit the West Bank Jefferson Parish Health Unit, on 1855 Ames Blvd., also in Marrero, and they can be called at (504) 349-8802. To inquire as to death records, call (504) 219-4500.

Jefferson Parish is directly adjacent to Orleans Parish and is generally included in the Greater New Orleans Area with a population of over 430,000 people. The parish was named for Thomas Jefferson in 1825. Due to the population drop in Orleans Parish after Hurricane Katrina, Jefferson Parish took over the spot as most populated parish in the state, and it had the fastest growing job sector in the country in late 2006.