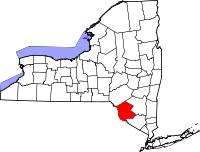 Sullivan County was formally established in 1809 and named after Revolutionary War hero, Major General John Sullivan. The area comprising the county was initially included in Ulster County which was one of the original 12 counties formed in 1683. The town and county seat of Monticello was established around the same time as the county itself and was named after the well known residence of Founding Father and 3rd President Thomas Jefferson. Monticello is home to the County Clerk's office in the Sullivan County Government Center at 100 North Street. That office functions as the official repository for such records as naturalizations, military discharges, property and real estate transactions, court records, and several others. Also, the Sullivan County Historical Society is located at 265 Main Street in the town of Hurleyville, NY. The Society offers a number of records both online and at its physical location.