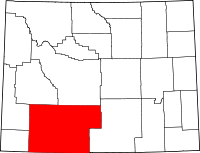 Information about marriage licenses in Sweetwater County is found online at the Clerk's website: http://www.sweet.wy.us/clerk/page4.html. Statewide reporting of Wyoming vital records commenced in 1909. Birth, death, marriage, and divorce records for Sweetwater County are maintained and provided at the state level and can be requested at the state: http://www.health.wyo.gov/rfhd/vital_records/certificate.html--instructions and requirements are provided in detail. Records in the public domain can be obtained from the Wyoming State Archives at http://wyoarchives.state.wy.us/. Sweetwater County was created in 1867 as a county within the Dakota Territory. The county was originally named Carter County for Judge W. A. Carter of Fort Bridger but was renamed in 1869 for the Sweetwater River.