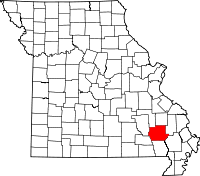 Wayne County, named after General Anthony Wayne, a general in the Revolutionary War who earned the nickname "Mad Anthony" due to his over the top exploits, was founded in 1818, three years before Missouri was actually admitted as a state. The original borders of the county were massive, and very much larger than they are currently; in fact, 32 of the surrounding counties either got some or all of their area from what was originally Wayne County. The current county seat of Greenville was originally known as Cedar Cabin and was of the very first settlements in the region. Wayne County is served by the Health Center, as well as the Recorder of Deeds and Circuit Clerk for the collecting and dispensing of its records. All three agencies are in Greenville, and all are open to the public for research purposes.