Archives Blog ›› Miscellaneous ›› Getting the Most Out of Marriage Records

Getting the Most Out of Marriage Records

Marriage records are vital to genealogy research. They document the beginning of a couple's legal status and, at least in the case of first marriages, show the bride's maiden name. But there are clues for further research even in the most basic of marriage records. Let's take a look at how we can use marriage records to their fullest.

Beyond the Bride and Groom

At a minimum, a marriage record contains the names of the bride and the groom, the date of the marriage, and the name of the person who performed the wedding. It's the last bit of information that can be a big clue for further research. Was it minister or a Justice of the Peace? If it was a minister, could there be church records that pertain to this marriage?

Look for initials after the name of the person who performed the wedding. Some common abbreviations include J.P (Justice of the Peace), M.G. (Minister of the Gospel), and P.G. (Preacher of the Gospel). You might also see the abbreviations of various Catholic orders, such as S.J. (Society of Jesus).

If your couple was married by a minister, research that person to find what church he or she was affiliated with. Sources for this information include census records, city directories, and obituaries. Then, follow up with that church to see if it has a marriage record for that couple. It could be more detailed than the civil marriage record. In the record below, we see that George and Lizzie were married by T.E. Sherwood, M.G. We could research T.E. Sherwood to see what church he was affiliated with and look for further records there.

Older marriage records might have recorded a bondsman, someone who posted money to ensure that there was no legal impediment to the marriage. The bondman may have been related to either the bride or the groom; researching this person can be useful. 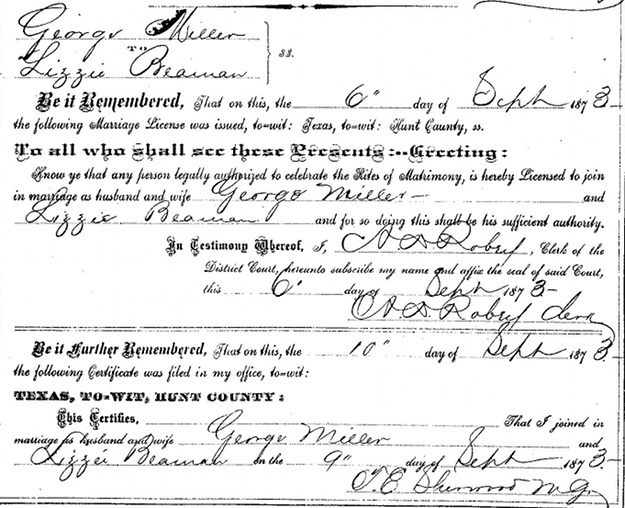 Get the Dates Straight

Archives.com has 95 collections of marriage records. Keep up-to-date with new additions here on the blog, via Twitter (@archivescom) or on Facebook.