The Great Depression is mostly documented through first person accounts, government policy records and newspapers. Great Depression newspaper accounts document how this time in history was started, and how this tragedy was approached and viewed by the public. The Great Depression began on October 29, 1929, also referred to as Black Tuesday, when the stock market crashed. It ended in the early 1940s, which led into what became known as the Baby Boomer generation.

Great Depression newspaper accounts document how the crash began in the late 1920s and how this prompted the first real government involvement in the economy. When the stock market crashed on Black Tuesday, some banks that had invested clients' money into the market were forced to close. This set off a massive national panic, as people stormed the banks trying to withdraw money. The Great Depression newspaper accounts also note how farmers, who were typically immune from recessions, suffered greatly too.

President Roosevelt was elected by a landslide in 1932 on his New Deal campaign. Great Depression newspaper accounts show that when the U.S. entered World War I in 1941 after Pearl Harbor, the economy started to really turn around as America became industrious again.

1929: On October 29, also called Black Tuesday, the stock market crashed and caused a national panic and is considered the official start of the Great Depression.

1930-1935: The Dust Bowl occurs, which was a widespread drought that drove farmers off their land in search of better land and work.

1932: President Roosevelt is elected on his campaign centered around the New Deal, designed to get America back into economic prosperity.

1933: 11,000 banks close, and Roosevelt announces a 3-day bank holiday to prevent another run on the banks. The Federal Deposit Insurance Corporation is formed, along with the Civil Works Administration, which hired 4 million people for public works projects.

1935: Social Security Act is formed and signed and would be funded by a payroll tax.

On July 19, 1932, The Pharos Tribune, which was published in Logansport, Indiana, reported on the hunger protest around the state capitol that demanded relief in the form of $25 million to be paid into a state jobless relief fund. Also reported in this Great Depression newspaper article was the fact that water was being turned off in homes of the poor, meaning that many people were not only starving, but thirsty too. Another protest of hungry men going towards the waterway dam on the Illinois River was met by gunfire. The guns fired into the crowd killed one man and injured 17 others. 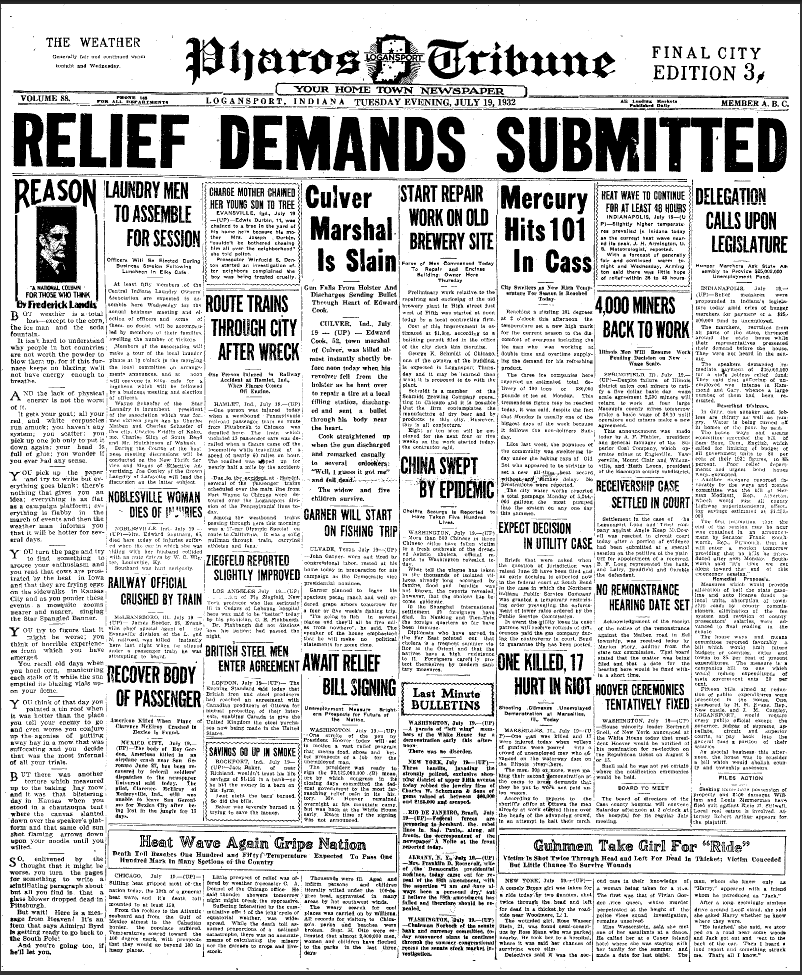 Also occurring in this Great Depression newspaper edition is the fact that a local utility company was in court fighting the mandate that they lower their rates. If the utility company loses the suit, they will be forced to refund many customers. Also reported is work to be completed on a brewery plant in town, owned by a Chicago businessman. This project will employ 8 to 10 men for over a month, although plans for the plant were simply conjecture.

Also reported in a Great Depression newspaper article was the fact that thousands of miners would return to work, despite a wage of $5 not having been successfully negotiated with the mining company. The Superior Coal Company was in talks with the Illinois district union coal miners to raise the basic daily wage, but despite talks being stalled, miners will return to four different mines in Macoupin County.

These Great Depression newspaper articles are representative of the times where people were angry and scared due to lost jobs, hunger and thirst. Some businesses were trying to give people jobs and others were fighting losing profits, like the utilities companies. Many people protested to try and get local governments to help.