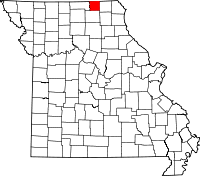 Schuyler County is one of the smallest counties in Missouri in both land area and population. As of the 2010 census, there were a mere 4,400 people residing in the county, which was founded in 1845. The town of Lancaster, the county seat, is where the Circuit Clerk, who also functions as the county's Recorder of Deeds, is located, housed in the Schuyler County Courthouse at 1 Courthouse Square. Due to the two positions being combined, the office handles indexing and distributing most of the records for the county. Birth records, available from 1920 to the present, and death records, listed from 1980 to the present, are available from the Schuyler County Health Department at 275 South Green, also in Lancaster. Applicants must meet certain state requirements before records can be presented to them: they must be the registrar, an immediate relative, or a legal guardian or representative.