Uncovering data and documents of your seafaring ancestor can be challenging. Seamen and privateers' commitment to life on the seas rarely produced land deeds, etched tombstones, family photos, or other favorite genealogical treasures. Research is further complicated by Britain's impressing of American sailors and privateers into the Royal Navy. Perhaps your mariner was one of the 10,000 impressed seamen who served under the enemy's flag between 1802 and 1812.

Impressing seamen became a common practice during the Napoleonic Wars by both the British colonial rule and the French. In 1757 British soldiers forcibly corralled eight hundred tradesmen and sailors from New York taverns and popular gathering places, for the purpose of forced military service.

After the Revolutionary War, the British continued seizing U.S. flagged vessels and impressing their crew, making protection of U.S. Seamen on American ships a contributing factor of the War of 1812. Many historians argue that the Revolutionary War began in Massachusetts in 1775 but did not actually end until 1815 with the signing of the Treaty of Ghent.

To protect American crew and mariners, Seaman Protection Certificates (SPCs) were issued. While impressing seamen ceased after 1815, SPCs were issued as through the Civil War and even as late as the World War 1 era (1918-1919). (See: Records of the Bureau of Marine Inspection and Navigation. Seamen were also enumerated on the 1930 Merchant Seamen, "Crews of Vessels.," available on Ancestry.com and NARA microfilm M1932.

Many African Americans served during the War of 1812 on both land and sea. Free coloreds, runaways, and ex-slaves served on desegregated vessels while holding Seaman Protection Certificates and were impressed along with their shipmates. In 1838, the well-known runaway, orator, and abolitionist Frederick Douglas donned a sailor uniform and borrowed an SPC to aid in his escape from slavery.

The details provided by sailors on SPC applications can prove to be a treasure chest for family historians. These applications were an attempt to clearly identify American citizens at sea. In addition to occupation, place of birth, and physical descriptions of scars and marks, the genealogist may uncover home address and family information from the SPC application. Family members often served as witnesses and signed a sworn statement, identifying themselves as a "wife" or "mother."

Researchers should not accept the myth that seamen were limited to those living in Atlantic seaboard states. Men from age eleven to seventy seven years old represented all the states and territories. Missouri seaman John Finn, was 14 years old, from Hermann, Mo. and he worked out of the Port of Philadelphia. 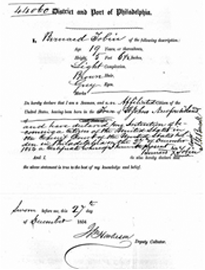 While researching African American ancestry, you may uncover a slave master's name, emancipation information, and country or residence of origin. Samuel Ridley, an ex-slave from Long Island, NY informed the in-taker that he "was manumitted in the year 1792 by Stephen..." Samuel's application goes on to tell us that he served nine years in Philadelphia for his freedom.

Five Places to Begin Your Search

Original mariner issued certificates are rarely located, but SPC applications for several ports, newspaper articles, application abstracts, and government reports are available to researchers. The family researcher will find birth information, next of kin, place of origin, and naturalization information on these applications. It is possible your impressed ancestor was captured and his original (or second or third) certificate was confiscated. So it is not uncommon to find several applications for one seaman. Here are a few places to begin your search:

The National Archives in Waltham Massachusetts holds the original 31,047 SPCs issued at the Custom Houses of Fall River, Gloucester, New Haven, New London, Newport, Marblehead, and Salem. These certificates are indexed on the

The Library of Congress "American Time Capsule" collection holds digitized copies of the Impressed Seamen from Salem from the 30 March 1813 and 2 April 1813 "Salem Gazette".

A primer on the Seamen's Protection Certificates can be found on the Ancestry.com Learning Center.

"Genealogical Fallout from the War of 1812" by Ruth Priest Dixon was also printed by Prologue Magazine. 1992. Be sure to also review "Index to Seamen's Protection Certificate Applications, Port of Philadelphia" by Dixon.