As a beginning genealogy researcher, my only expectation was to learn about my family. I began searching my paternal family in the 1970's before the Internet. These ancestors were Quakers, whose recorded activities and travels are published in bound volumes available in the local library. Once they arrived in Iowa, my ancestors remained in the same area. The research and results were straightforward.

My mother asked me to investigate the purported female American Indian in her family, which turned out to be not so straightforward. Failed attempts to prove that heritage have taken me down paths I might not otherwise have gone. The most common tools and records utilized in genealogy research have yielded the most unexpected results researching on my own behalf and for others.

After connecting with Donna on a genealogy board, we met over lunch with other family members and visited a cemetery to view the grave of a common ancestor, Martha. We didn't know where her husband, John, could be buried. Many people researched this family line and no one had discovered his burial site. Donna and my mother requested the location of Martha's grave. I watched as they walked toward the car, their faces like proverbial children in a candy store. The cemetery records contained a typo in John's last name separating his name from Martha's on the list. There currently is no headstone, but they are together under this beautiful tree. 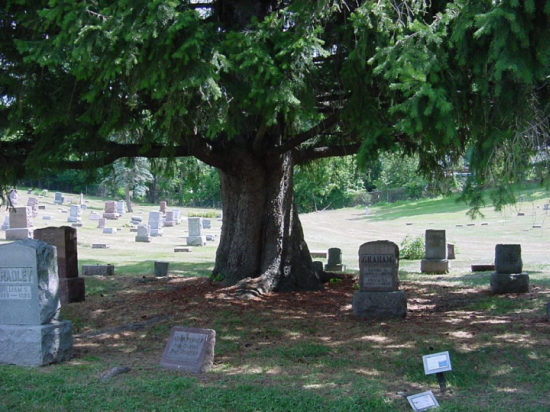 This event secured my friendship with Donna and the synergy that exists in our genealogy pursuits. I realized the value of genealogy connections and the results of combined efforts! Donna and I continue to collaborate on family research and will remain lifelong friends.

Unkempt Pioneer Cemeteries, Dowsing And Help From Above?

John's parents were William and Ellen. William's grave is in a pioneer cemetery on an acre of ground in the midst of farm land. The land has never been deeded, and no one has responsibility for cemetery maintenance. The presence of William's grave in this cemetery was recorded in the 1940's and again in the 1970's. Donna related a conversation with a local farmer who advised headstones had been stolen by teenagers and others knocked down by pigs rooting in the dirt. Trees and weeds were totally overgrown throughout the cemetery, and few headstones remained standing.

Donna and I made plans to visit the cemetery with a local resident, Harlan, who has ancestors buried there. Donna's brother, my mother and my son also participated. The below pictures reflect the grove of trees engulfing the cemetery and the growth throughout the cemetery. 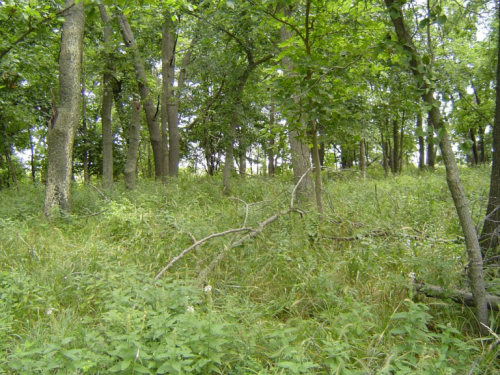 We wandered around the cemetery staring at the ground, combing through weeds and leaves and stumbling over tree limbs, trying to locate downed headstones. William's was not among the headstones still standing. We occasionally discussed a new plan of attack while trying to track the ground already searched. We were discouraged but undaunted. Suddenly, I heard shouts of "We found it, we found it!" Everyone ran toward my son who had turned over a headstone lying face down in the dirt. It was William's headstone and, because it had been in the dirt, was perfectly preserved. Finding that headstone was a truly exciting experience! When the initial excitement had worn off, Donna and I looked at each other. After a moment, one of us said, "I know William helped!" In addition to that shared realization, I was reminded of the results that come with group effort.

For those whose beliefs allow for the possibility, the following websites contain stories of ancestors assisting in genealogy research: truemiracleswithgenealogy.com and genealogytoday.com.

We returned to the cemetery another year with a woman who uses dowsing rods to locate unmarked graves. We had been unable to find any burial information for William's wife, Ellen. The rods identified disturbances under the ground around William's grave indicating three possible graves. We may never find a marker, but are fairly certain that Ellen lies next to William. With each visit, the ground exposes new discoveries. As a result, we have identified other family members not listed in previous cemetery accountings. Several years of research revealed that every family buried there is related through marriage.

For information on dowsing, see "Grave Dowsing" by Brenda Marble at tommymarkham.com and "Dowsing Methods Used to Find County Graves" by Linda Bell at northfortynews.com .

Locating records of William and Ellen prior to 1870 proved challenging. I finally found them with one letter different in the spelling of the last name. My mother and I were at a loss as to the reason. For other purposes, we requested the Civil War military file of their son, John. An affidavit in that file listed both spellings of the last name. It further stated that his parents had changed the name once their children had become adults. John had applied and reapplied for a pension over the course of many years, listing various physical disabilities. The government did not find any records proving John's Civil War service, and denied all requests for a pension. My mother was in tears imagining the pain he suffered and his lack of financial support. It was satisfying to know that the name change was intentional. The rest of the information was probably more than my mother needed to know!

One of my mother's aunts, Betty, was an amusing character, and I remember her well from my childhood. Armed with the names of Aunt Betty's two husbands, I discovered that, unknown to my mother, she also had marriages at the ages of 15 and 17!

Jim had trouble tracking a man prior to marrying into his family and asked me to see what I could find. I located him in 1920 and shared a fiendish laugh with Jim over his incarceration in Alcatraz! Normally Alcatraz is no laughing matter; however, it did not become a federal prison until 1934. Prior to that time, the U.S. Army owned the land. Jim's relative was housed in the Disciplinary Barracks, now known as "The Rock."

Tom's mother died when he was four. He had seen his grandmother a few times throughout her life, but was not sure what happened to his grandfather, James. As I researched, I found what appeared to be two men with the same French last name, spelled two different ways. There were a lot of similarities in the information, but also some distinct differences or errors. Because I did not find records for two men in the same year, I concluded there was only one. Apparently, James had remarried and had children shortly after leaving Tom's family. One key piece of information connecting the two men was the name Yvonne given to Tom's mother and to the daughter of the second marriage.

Further research turned up several newspaper articles in the early 1920's about Edward, a former employer of James, who had staged his own fiery death to escape debt and his wife. He and his mistress were eventually captured, but whose bones were in the fire? Since James had disappeared around the time of these events, it was assumed Edward had killed James. Authorities found James imprisoned in another state for selling fraudulent stocks. He had another wife and child and was using an alias! Eventually Edward confessed that he had dug up bones of a relative to use in the fire.

The wife and children of the possible second marriage are now deceased, but I was hopeful the descendants could confirm the relationship of James to Tom. I made email contact with a descendant, Charlotte, who shared that there is a story in the family that James had another family! This confirmed for me that James is the ancestor of both Charlotte and Tom. We have not yet exchanged additional information, including the existence of a third family! Interestingly, Tom winters in Phoenix and has done so for many years without knowing of the existence of the second family. This coming winter, the families plan to meet. Obviously, the fire and prison story will be a topic of discussion. Everything about this project was unexpected and fascinating. However, finding an unknown family who can share stories with Tom about his grandfather is far beyond my - and Tom's - expectations!

The article "GENEALOGY: Investigating a surprising divorce" by Betty Malesky at gvnews.com relates another story highlighting the twists and turns that can occur in discovering family history.

DNA testing is becoming a popular genealogy tool for identifying origins in specific areas of the world and living persons with matching DNA markers. It seems unlikely that any findings of DNA testing can be "expected".

DNA testing confirming that Thomas Jefferson fathered children with one of his slaves may have sparked greater interest in using DNA testing in genealogy. For more information on this story, see "The Family Tree of Thomas Jefferson" by Rita Marshall at suite101.com.

The potential for the unexpected can be found in any letter, newspaper, census record, marriage or death record, cemetery, cemetery record, family Bible, armed services record, obituary, family gossip, prison record, photograph, DNA, other researchers - the possibilities are truly limitless! No piece of information, person or idea should ever be discounted. The element of the unknown can be the perfect breeding ground for the surprising and unexpected!