A group of records often overlooked by researchers are the records of the Civilian Conservation Corps (CCC) programs, a "New Deal" program. These are great records since they encompass from the early 1930s to the early 1940s. With the 1940 census not yet released and a depression which forced the relocation of many to find work, these records can be invaluable as we research 20th century family members. Additionally, they are a great source of "color" for our ancestor's lives. For most of us, unless your ancestor kept a diary or journal, it's not often that we can find resources that give us a sense of what our ancestor's lives were like.

What was the CCC?

Per The National Archives and Records Administration (NARA):

"The Civilian Conservation Corps (CCC) was a Depression-era public relief operation designed to alleviate unemployment and restore the country's natural resources through public works. Organized on April 5, 1933, as the Emergency Conservation Work (ECW), the CCC provided employment and vocational training for unemployed youths, as well as war veterans and Native Americans, through conservation and natural resource development work till the program concluded in 1942.

During its tenure, the CCC was supervised jointly by four government Cabinet departments: the War Department provided administration, transportation, housing and discipline; the Departments of the Interior and Agriculture planned and organized work; and the Department of Labor selected and enrolled applicants via state and local relief offices."

For more history, check-out "The Civilian Conservation Corps, What it is and What it Does" and also the CCC Legacy web site History Center, where you will find historical information and Camp Lists organized by state. Do note that often, "colored" and "whites" were not in the same camps, at least in the south and so the camps are designated in the list with "C" for colored.

As mentioned, the CCC was part of a broader group of programs called the "New Deal". The National Archives holds the vast majority of administrative records on the creation and operation of New Deal programs, including records from the National Recovery Administration, the Civilian Conservation Corps, Works Projects Administration, National Youth Administration, Public Works Administration, and the Federal Works Agency. These collections include over 14,000 cubic feet of textual records, over 40,000 maps, charts, plans and drawings, and about 175,000 photographs and negatives. In addition to the temporary programs which ended in 1943, the National Archives also houses the records of many permanent Federal agencies that were responsible for planning and directing the work of these temporary agencies.

If you find this a fascinating subject or plan to research these records, do check out these other resources: 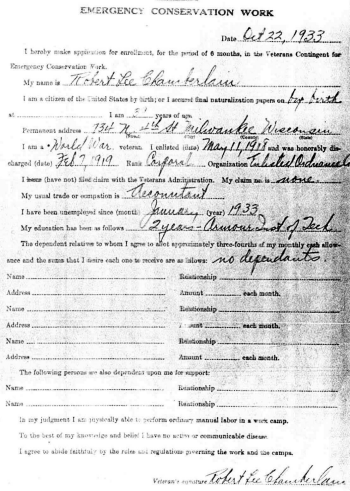 Since those at CCC camps (and part of the WPA program) were federal employees, you should be able to find "service" information for anyone enrolled in the program via the National Personnel Records Center (NPRC).


Such a personnel file may include application information (which include a lot of what we genealogists consider juicy details), education, camps and duties, medical information, leave and absences, and discharge information. A packet I received for someone who served in several camps from the mid-1930s through c. 1942 was about 3 inches thick and revealed many details about family that we were not aware of never mind providing a road map for where this person lived during the documented time period.

The details for how to request a person's file can be found at www.archives.gov, though key details are listed here.

Requests for Civilian Conservation Corps records should include:

sponsored by a Federal agency

There is a fee for this service. Though it is suggested that you provide the above, they can find service records for individuals with incomplete information. Key information are name, date of birth and parents' names.

How Do I Know if My Ancestor Served?

To some degree, whenever we visit a National or State Park, drive along a parkway, etc, we are enjoying the labor of CCC Camp members. For the most part, that was my context about the CCC (and WPA). Mostly alphabet letters representing entities where people worked during the depression and which benefit us to this day.

I didn't really fully appreciate and explore these records further until I received the SS-5 for someone and his SS-5 (1937) gave an address of Camp Whitnel Park, Hales Corner, WI. After some research, I learned that this park had been part of the CCC and WPA programs during the depression.

I also learned, that by the time of the 1942 "Old Man's Draft" that this same person was still working at a Camp as he gave his address as Post Exchange, Camp Grant, Rockford, IL. Camp Grant was a military camp. And, the obtained records suggest that for the most part, this person worked stints at various CCC Camps located in the IL and IA area between 1936 and 1942. His personnel file ultimately filled in 6 years of his life in minute detail.

This suggests that you might find clues on an ancestor's SS-5 or 1942 draft record which might suggest, as it did for this example, that he spent time at a camp. You might also find memorabilia left behind or remember stories of dad or granddad working and living in a camp. With the information provided either on an SS-5, you should have enough information to request that persons CCC personnel file (discussed previously).

Unfortunately, this particular record group (RG) is physically located at NARA II (College Park) and my conclusion after looking at every folder for a camp based in NC (the records are organized by state and then numerically by camp identifier)are that "lists" of those who worked at the various camps can be hard to come by, at least in these records.

Research into RG 35, Camp Inspection Reports 1933-1942, Entry 115, North Carolina, Boxes 156-161 revealed few "lists" upon a cursory glance. Though a few lists of names were found, it was more often found that the folder for each camp contained reports, menus, newspaper clippings, photographs and more - giving you a sense of the camp as a whole and its operations, diet, achievements, etc. Sometimes you are lucky and find documents that do "list" names - holiday menus which list all the camp members at the time, petitions, etc. If you know that your ancestor served in a particular CCC camp, do check out these records though only after checking out Camp Newsletters (easier to access and more informative) and only with an eye to getting a sense of what camp life was like and not so much information about your ancestor, per se.

Additionally, there are other relevant records found in the records of the various Federal agencies involved with the CCC, for example you might also find records in the Records of the Veterans Administration (RG 15), Office of the Secretary of Agriculture (RG 16), Office of the Secretary of the Interior (RG 48), the Natural Resources Conservation Service (NRCS) (RG 114) and elsewhere. Consult the preliminary inventories (PIs) or other finding aids before delving into any of these large collections.

Camp Newsletters - So Much Fun! 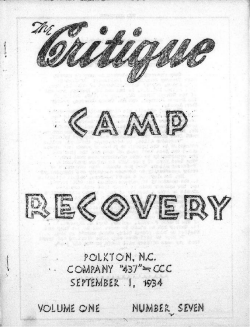 A great resource for camp news is the camp newsletters. These were produced by just about every camp. These camp newspapers are about as varied as the camps they serve and include basic hand-written publications, to type written publications to ones which included photographs and were obviously offset print.

These can be accessed online via Center for Research Libraries (CRL), (go to this catalog page, and scroll to where it says Civilian Conservation Corps Camp Newspapers - you can browse by state or search by CCC Company Number). You can search for free to determine if a newspaper survives for the camp and/or locale of interest and you can gain free access through a participating institution. Or, use the "Digital" tab of the web-site and in the search engine and put in the camp newspaper name, or possible location (city or state level) and you will then be able to see if there is a digital version; then accessible through a participating institution (the newspaper will be made available in PDF format). Otherwise, there is a fee to obtain fiche cards or microfilm reels.

As with the camp inspection reports, much of the newsletter content reflects the "big picture" of the camp and its activities as well as puzzles, stories, poems, jokes, sports and other entertaining items and often you will find advertisements included from local businesses. Some newspapers rarely mentioned individual names beyond the newspaper staff and the highest echelon of camp staff while others frequently mentioned the names of individuals coming, serving or leaving the camp.

I saw the nick-name "Townsend Zander" on more than one list and had to pursue that. I couldn't imagine what it might refer to. What I learned is that it appears that Townsend Zander was a character in the comic strip "The Gumps." On page 72 of the book "Everything was better in America: print culture in the Great Depression" by David Welky he tells us that "The strip further posited that the unchecked pursuit of wealth twisted decent people into monsters. It best demonstrated this by introducing Townsend Zander ... Townsend disappeared years before and was presumed dead. Actually, a mad craving for riches caused him to abandon Henrietta and seek his fortune in the Yukon gold fields. Returning home broke and penniless, the ragged adventurer seems to recognize his mistake." Now we know a bit more about the persons who ended up with that monicker!

A October 9th 1834 Edition (Volume 1, Number 5) of The Sand Dune Echo included a list of "Twenty-two men were discharged on September 30." While the June 9, 1834 edition (Vol 1, No 3) of the Camp Exchange went further and published the hometowns of the 'Old Boys" leaving. Whereas the December 15, 1934 edition (Vol 1, No 11) of the same newspaper includes notes about those leaving and a complete camp roster!

Another camp's newspaper listed the "last will and testamentary" for some of those leaving to start a new camp - a very funny read! And, other camp newspapers listed new additions to the camp. Hopefully these examples give you a sense now of what neat things you might find in the newspaper published by the camp where one of your ancestors may have been living.

Whether you are seeking information about your specific ancestor or just trying to get a sense of what life in a CCC camp was like, do try and access these newsletters. They are such a fun read that it is hard to put them down.

We sometimes get so focused on older records that we do overlook some of the rich modern records that can tell us more about people that we might actually remember or heard stories of. You may find wonderful records of fathers, uncles or grandfathers in the records of the CCC. Many of our ancestors participated in this program and helped create many of the National Forests, Parkways, Buildings and more that we enjoy to this day.

(Diane L. Richard has been doing genealogy research for over 24 years. She initially discovered CCC records a few years ago and got re-acquainted with them the summer of 2010. She currently does professional research in NC and DC and can be found online at www.mosaicrpm.com)